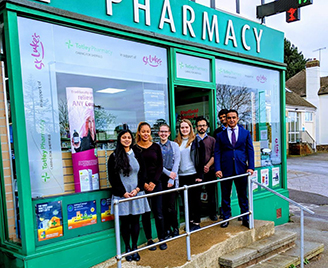 One of Sheffield’s leading pharmacies has been praised for its work with the local community after it was named a finalist at one of the UK’s biggest industry awards ceremonies.

Totley Pharmacy, based on Baslow Road in Sheffield, was shortlisted in the Local Health Initiative of the Year category at the national 2018 Pharmacy Business Awards, held at Park Plaza Westminster Bridge, London.

The leading South Yorkshire pharmacy fought off stiff competition to be named in the top three in its category and was praised for its connection with local people by a panel of judges at the glittering gala dinner.

Totley Pharmacy’s success comes on the back of a year in which it formed a partnership with St Luke's Hospice, donating £7,000 during 2018 and also indirectly aiding their fund-raising efforts. The business also sponsors Sheffield United Football Club.

In partnership with Sheffield United Community Foundation, in 2018 the pharmacy worked with a local primary school and organised a walking football tournament to promote healthy living and exercise for the young and old.

Owner Tajinder Singh said: “We’re thrilled to have been a finalist at one of our industry’s top national awards ceremonies.

“Recognition such as this emphasises that we do things the right way and we will continue to stay true to our values. I would like to thank the whole team for their hard work to achieve and maintain such high standards, and to all our patients and partners for supporting our work.” For more information visit www.totleypharmacy.co.uk or call 0114 236 1070, or search for ‘Totley Pharmacy’ on Facebook.