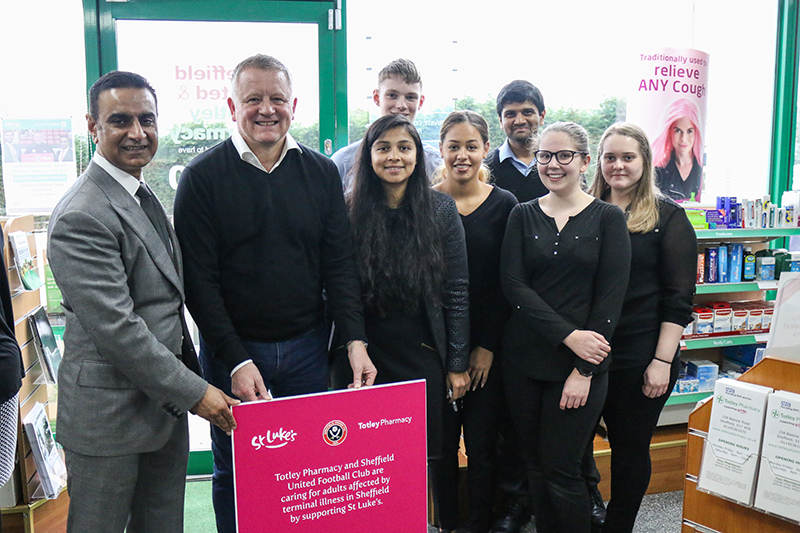 Totley Pharmacy’s donation station for St Luke’s Hospice was opened to the public on Friday by the Sheffield United boss.

This is the third year running that the Totley based pharmacy has supported St Luke’s, a hospice specialising in care for terminally ill patients throughout Sheffield. It also marks the continued sponsorship of Sheffield United by Totley Pharmacy.

Chris Wilder, who has led United to promotion and continues to maintain a championship promotion push this season, described it as ‘very important that we recognise local charities raising money for a good cause like this.’

He continued; “Being from Sheffield myself there’s obviously a connection. Unfortunately, my father in law passed away a year and a half ago and spent his last days in St Luke’s, so I know how special it is and what a fantastic job they do in the City of Sheffield and the surrounding areas of taking care of people in difficult times.”

Many locals attended the opening of the fundraiser, contributing clothes and money, and looking for photo opportunities with their United hero. Patrick Connolly, a veteran Blades fan, thought it was ‘fantastic’ that Mr Wilder came here in the middle of the season.

Mr Connolly went on to say; “I have donated to St Luke’s in the past, but this is another opportunity, and it’s great to meet such a fantastic manager from the club I have supported for decades.”

St Luke’s hospice is heavily reliant on charity, only receiving 25% of its funding from the NHS. Peter Hartland, one of the hospice’s chief executives, described events like these as ‘integral,’ and was ‘grateful to every single person who contributes.’

Tajinder Singh, the owner of Totley pharmacy for the past 23 years is proud of their continued community work with local organisations and schools including funding a local walking football tournament.

Mr Singh stated; “As opposed to just being a business, we do try to make it about caring for the community, caring for people.”

CONTACT
158 Baslow Road
Sheffield
South Yorkshire
S17 4DR
Contact Us
0114 236 1070
INFORMATION
Company Registration
06703027
Premises GPhC Number
1091169
Superintendent:
Tajinder Singh (2041439)
OPENING HOURS
BRANCHES
See All Branches
Cookie Policy
Privacy Policy
Terms And Conditions
Local Shopping Policy
Copyright 2021
Powered by www.thepharmacycentre.com
and www.medicinechest.co.uk
We were unable to connect you to our system.
Please click to try again.
If this problem persists contact info@thepharmacycentre.com
This website is no longer available, If you are the pharmacy owner, please contact The Pharmacy Centre to re-activate.
Don't show this again
Don't show this again
MENU
Main Menu
No Results
Shopping Categories
More Categories
In Store Shopping
More Products
Online Shopping
More Online Products
Health
Search Health Articles...
Search Medicines...
Coronavirus Advice
Admin Tools
Settings
Volume
What is a travel clinic and how can it help you with your travel vaccinations?
Device
Your Basket
In Store
Total
Checkout
Online
Total Excl VAT
VAT
Total
Checkout
Live Chat
Live chat is currently disabled. Toggle the switch to make yourself available for live chat.
Active
Pending
Type your message and press enter to send, An administrator will reply to you shortly
Chat...
Send
End Conversation
Back to Chats
Please select a branch to view orders, patients and history...
Website
Select Branch
Order In
Patient Orders
Pending Orders
Complete Orders
Order History
Patients
Register Reminders
Statistics
Configure
Log Out
Speciify which content you wish to enable on your site
Flu Pages & Content
Medic Spot Covid Test Pages & Content
Medic Spot Travel Planner
Online Doctor Pages & Content
Testimonials Pages & Content
Travel Clinic Pages & Content
Back
Next
What do you want to do?
Visit the website home page
Visit the website page for my pharmacy
Change my pharmacy
Back
Next
1
2
3
4
5
6
7
8
9
10
11
12
13
14
15
16
17
18
19
20
21
22
23
24
25
26
27
28
29
30
31
Back
Next
Please provide your email address you use to login to your account, we will then send you a password reset code.
Email
Back
Next
Back
Next
The following list shows all the items you have placed orders for, click on an item to see all the dates you have placed an order for the item.
Back
Next
Please provide a little more information to finish setting up your account...
Which of our stores you use
Are you registered for GP online services?
The surgery you are registered with
Are you exempt from prescription charges?
A contact telephone number
Your home address
Messages
No new messages
Your surgery does not currently allow you to place orders via GP online services. Please contact your surgery to resolve this or click here to unlink.
Online prescription ordering is not currently enabled for your branch. You can still store your items and set reminders to re-order.
You haven't set up any reminders to reorder your prescription items. Click here to setup reminders now
Your recent prescription orders
What do you want to do?
Change User
Order
Manage
Pharmacy
History
Purchases
Log Out
Please enter your login details to access your account...
Email
Password
Keep me logged in
Help! I have forgotten my password
Back
Next
To keep your password secure you will periodically need to change it. Please provide a new password to login to your account.
Email
New Password
Back
Next
If you have an NHS account you can use it to login to your account. By doing so we can automatically collect information required to connect to your GP online.

You will need to give NHS login consent to share your information with us for the purposes of creating your account with us, ordering repeat prescriptions, sending your GP a message and seeing the health information your GP shares with you